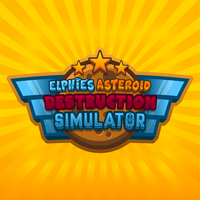 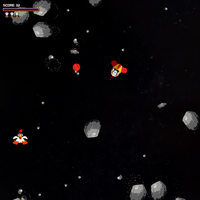 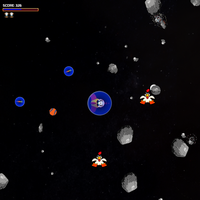 Zack here. Apologies for the radio silence as of late. It’s been a difficult time. Earlier this year, I moved to the UK for work. During the move, it was revealed that my dog of 14 1/2 years, Elphaba Potato was diagnosed with terminal bladder cancer. After uprooting our lives and experiencing the most stressful move that I’ve ever been a part of, she started to decline.

On July 18th, Elph passed away in our arms.

In the weeks following, I attempted to keep my mind busy by learning about the Gamemaker engine. I went through a few tutorials and very quickly had a little prototype running. When I wrapped the prototype, I decided to just keep puttering with it to see what else I could do. As I was working on it I thought what would pretty much be the antithesis of previous Winter Night projects? How could I honor my precious mutt? How could I combine the two?

Well…I’m happy to announce that our next project is a goofy little thing called “Elphie’s Asteroid Destruction Simulator”.  It's free.  Check it out if you have a spare 10 minutes or so.  It makes me smile.  We'll continue to play around with it and update to new platforms and whatnot, but we wanted to at least get it out on Windows now.

Happy Holidays to everyone and if you have a furry critter, please give them a little scratch from us at Winter Night Games.